How to Make Paper Airplanes 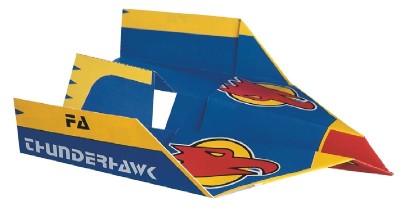 The FA Thunderhawk paper airplane is a killer flying machine ready to battle for control of the skies. Carrying tons of weapons, this attack bomber can damage enemy outposts.

How to make the FA Thunderhawk paper airplane:

Step 1: Cut out the paper airplane pattern. Fold the paper in half on the center line, and open up the paper so it lies flat.

Fold the paper in half on the center line.
©2007 Publications International, Ltd.

Step 2: Fold down both corners.

Step 4: Fold down the corners again.

Step 5: Fold up both wing tips.

Step 6: Fold the plane in half. Then fold down the wings one at a time.

Fold down the wings one at a time.
©2007 Publications International, Ltd.

Step 7: Cut the tail along the solid cutting line.

Cut the tail along the solid line.
©2007 Publications International, Ltd.

Step 8: Fold up the tail, and shape the plane as shown.

The SST Thunderdart is a speedy plane, and its paper airplane counterpart is no different. Learn how to make it in the next section.

How to Make a Paper Cup Phone

How to Make a Paper Guitar

How to Make a Paper Spider