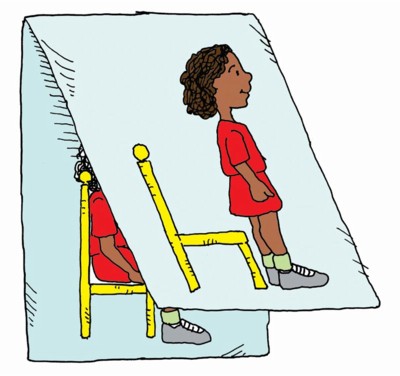 Step 1: Fold a strip of paper in half. On the bottom flap, draw a cartoon that shows half of a simple action -- for example, a person sitting in a chair.

Step 2: On the top flap, show the other half of the action; for example, a person standing in front of a chair.

Step 3: Now roll the upper flap tightly around a pencil to give it a strong curl.

Roll the upper flap so that the lower flap's picture is visible.

Step 4: Hold the upper corner flat against the table, and move the pencil rapidly up and down as shown to make the flap unroll and roll up again. If you do it fast enough, it looks like a cartoon of a person sitting and standing over and over again.

Kids can draw anything they like: a dog running, a face smiling, a ball bouncing, and so on.

Investigate the next activity and turn math into art!

For more fun activities and paper crafts, check out:

How to Make a Paper Cup Phone

How to Make a Paper Guitar

How to Make a Paper Spider