How to Fold Origami

Browse the article How to Fold Origami 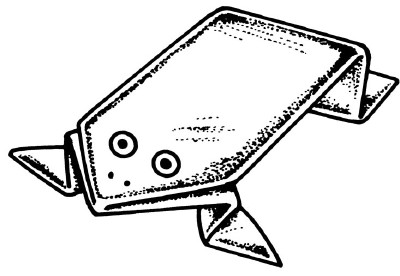 A piece of paper transforms as if by magic into a leaping frog.
©2007 Publications International, Ltd.

Origami is the Japanese art of folding paper into objects. It's an ancient art, but not as difficult to learn as it might seem -- with a little practice you can also learn how to fold origami.

Your friends will be amazed as they witness a simple index card transform before their eyes into creatures and objects they never expected. With a little patience and dedication, you'll be surprising even yourself.

Follow the links below to start exploring the world of origami:

Ribbit! Everybody will be delighted by the origami leap frog you'll learn how to fold here.

Go to the next page for the first origami project.

Turn a piece of paper into an origami leap frog and race it across the table.

How to make an origami leap frog:

Step 1: Follow the illustrations to fold the index card. Fold point A to point D. Unfold and repeat with the other corner, folding point B to point C.

Step 2: Fold the top half of the paper back and then unfold it.

Step 3: Holding the sides at point E and point F, push them in together toward the center.

Step 4: Press the top half of the paper down, creating a triangle.

Step 6: Fold the tiny triangles in half, lengthwise. Then fold each side of the index card in about 1/4 inch.

Step 7: Fold the bottom end of the index card up about 3/4 inch. Then fold that piece down in half. Turn your frog over, and draw on eyes. Press your finger on the frog's back to make it leap.

Learn some advanced origami techniques on the next page. 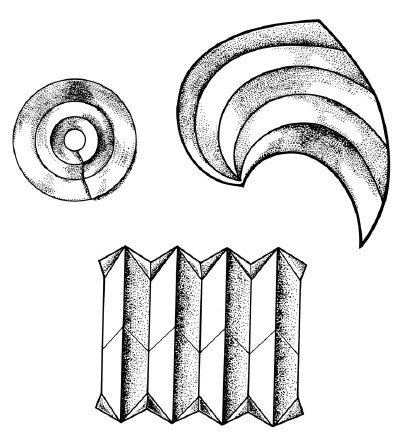 Learn how to use paper scoring to create fancy paper-folding projects. This advanced origami folding technique turns a flat piece of paper into three-dimensional art.

Scoring creates an impression on paper to use as a folding guide. This makes it easier to fold the paper into straight, curved, or wavy lines.

To score a piece of paper, use a ruler to guide the point of your scissors as you "draw a line" on the paper. To make curvy or wavy lines, use a compass or French curve ruler. Here are some paper-folding ideas to get you started.

How to score paper:

Step 1: Cut out a big circle from a piece of paper. Use a compass to score two circles inside it.

Step 2: Cut a slit from the outer edge into the center. Fold one inside circle, pinching it along the score line. Turn the paper circle over, and fold the other inside circle.

Step 3: Overlap the cut ends, and tape them together to secure.

Step 1: Cut out a curved shape from a piece of paper. Use a compass to score four curved lines on the shape.

Step 2: Fold each line, turning the paper over after each fold to alternate the fold direction.

Step 1: Score some straight lines on a piece of paper.

Step 2: Fanfold the paper along the score lines, then fold in the corners.

Step 3: Open the fanfold, and pinch the top and bottom triangle folds in the opposite direction of each fanfold crease.