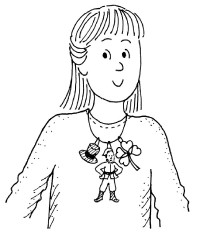 Traditionally, people wear green on St. Patrick's Day. Leprechauns, shamrocks, and foods like Irish soda bread are all symbols of the holiday.

Leprechauns are known for making mischief. You'll be able to watch over your own leprechaun this St. Patrick's Day.

You can catch a little luck of the Irish with these lucky charms. Learn about this fun craft.

Legend says that at the end of the rainbow is a pot of gold. Here's a fun game you can play with your friends this St. Patrick's Day. 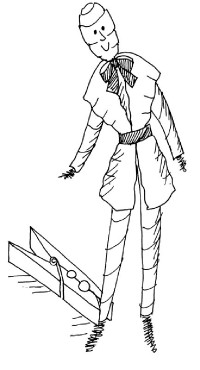 This little Limber Liam Leprechaun might be dancing a jig behind your back this St. Patrick's Day -- but he'll not so much as hop while you watch him.

Cut the pink and green crepe paper into 6x1-1/2-inch pieces. Twist the chenille stems together to make the leprechaun's "bones." Stick a cotton ball on the top of the neck, and wrap it with thread to keep it in place.

Wrap the pink crepe paper around the head and the green crepe paper around the figure. Wrap each body part separately so that you can bend the chenille stems at the joints in order to pose your leprechaun. Use more paper on the upper legs or arms to make them thicker; use less on the knees so you can pose them. Secure the ends of crepe paper with clear tape.

Use markers to draw a leprechaun face. Make your leprechaun a green suit and black belt out of felt or cloth scraps and glue them on him. To make him stand up, clip a clothespin to his heel.

Next, you'll learn how to capture a bit of the luck o' the Irish this St. Patrick's Day with your very own lucky charms.

Have an adult help you cook the corn starch, baking soda, and water over medium heat, stirring constantly. It will boil, then thicken. Cook until smooth. Let cool.

While the dough is cooling, bend the wire into a small "U" shape. Each arm of the "U" should be about 1/2-inch long. Clip off the excess wire. Make as many as you plan to make charms.

Roll the dough out to 1/4-inch thick. Cut out shapes with the cookie cutters. Use a plastic knife to smooth the edges. Press the open ends of the wire loops into the top of the figures; a little bit of the loop should be left sticking out.

Lift the charms with a spatula, and put them on a wire rack to dry for at least one day. Fill the holes around the wire with glue. When dry, paint the charms. Let dry completely. Paint with clear nail polish to seal. Let dry.

String the figures on a yarn necklace, tying each one in place.

Your lucky charms will come in handy for the game you'll learn about next. 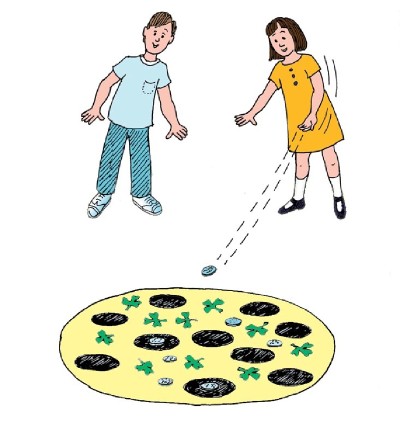 The lucky winner gets a pot o' gold!

This is a game for two to five people.

Use yellow construction paper to make a large circle. Cut ten quarter-sized shamrocks out of green paper. Glue them on the circle in a random pattern.

Cut out ten black banshee spots -- these circles should be twice as large as the shamrocks. Glue them on the circle in a random fashion.

The next player whose penny lands on a lucky shamrock gets to pick up all the "gold" on the board. The player with the most pennies at the end of the game wins.