How to Draw Planes

How to Draw the Space Shuttle 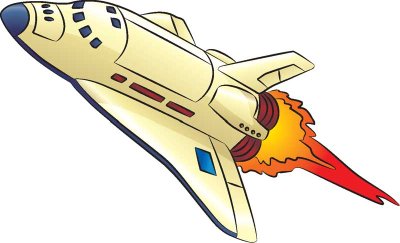 Follow the instructions on this page to learn to draw the space shuttle.

Your space shuttle can travel to the stars and visit distant worlds. Use these step-by-step instructions to create your own space-exploration scenes.

In this section, we'll show you how to draw the above space shuttle. Either draw it freehand while looking at your computer monitor or print out this page to get a closer look at each step.

Step 1: Draw the curved shape of the main shuttle body. Add a curved triangle for the forward wing and a wedge shape for the back wing.

Step 2: Draw a tall wedge shape at the back of the shuttle for the tail fin. Add rectangles on both wings and the tail fin. Outline the closest wing and the closest tip of the nose to add depth. Add a rounded nose cone.

Step 3: Draw two curved rectangles to create the cargo bay doors and a hatch on the nose of the shuttle. Add a rectangle for a hatch detail on the closest wing.

Step 4: Sketch four rounded shapes toward the back of the shuttle for the engine pods.

Step 5: Draw rectangles for the cockpit windows as well as hatch details on the body. Add three narrow ovals to the hatch on the nose.

Step 6: Draw line details on the wings, bay door, and fin. Sketch curved lines just beyond the shuttle for the engines. Add some small circles on the engine pod. Draw wavy lines for fire coming out of the engines.

Step 7: Trace the lines you want to keep with a felt-tip pen. Erase any extra pencil lines.

And there's your space shuttle. Keep practicing doing the same drawings -- your new sketches will get easier and easier!

Travel back in time with our next aircraft -- on the next page, learn to draw a World War II plane.