How to Draw Bulldozers 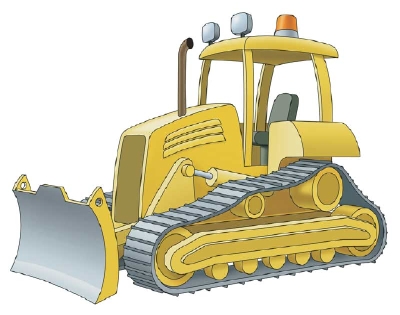 The bulldozer moves earth around, making it a handy vehicle on any construction site. Bulldozers are so strong, they are often used to move other earthmoving construction vehicles around.

In this section, we'll show you how to draw the above bulldozer. You can draw this construction vehicle freehand while looking at your computer monitor or print out this page to get a closer look at each step.

Step 1: To make the wheels that run the track, draw five small circles on the bottom; add outlines to provide depth. On each side of the five circles, draw a ring.

Step 2: Draw a curved rectangular shape over the bottom wheels; notice how the shape dips down at both ends. Draw a similar, smaller shape inside the first. Add outlines to provide depth.

Step 3: Draw a line around all the circles; make another line just outside the first. Draw the outside line to make the side edge and face of the track. Also notice the small lines you need to make on the inside of the track.

Step 4: To make the blade, draw a curved rectangular shape; add a tab to the top middle of the rectangle. Draw the sides of the blade and the details as shown.

Step 5: Draw the rounded triangle and rectangle that make up the lift arm that connects the blade to the bulldozer; add outlines for depth. Draw the fender -- follow the example shown.

Step 6: For the hood, make a rounded square shape with a tab at the fender. Draw outlines where shown. On the front of the hood, draw the grille, which is a rectangle with the top edges rounded.

Step 7: To make the cab, draw four thin, slightly curved bars. Outline each for depth. Draw the roof as shown.

Step 8: Draw the driver's seat in the cab, and add two headlights and a safety light on top of the roof. On the hood, draw a curved exhaust pipe. Add a circle to the end of the pipe.

Step 9: Draw three rectangular vents in the hood. Each vent is a little larger than the one above it.

Draw a hydraulic cylinder extending from the triangular part of the lift arm to below the fender. Look carefully, and draw the other lines that finish the body of the dozer.

Step 10: To make cleats on the tread faces, use a ruler to draw the small evenly spaced rectangles across the track. On the back and underside of the tread, draw small triangular bumps.

Step 11: Use a felt-tip pen to trace over the lines you want to keep, and erase the extra pencil lines.

You did it! So let's move on to a construction vehicle that does a lot more than push materials around. It lowers, lifts, and moves heavy materials high into the sky, and in any direction they need to go.

Continue to the next page to learn how to draw the giant, yet graceful, crane.