How to Draw a Chef in 5 Steps

Browse the article How to Draw a Chef in 5 Steps 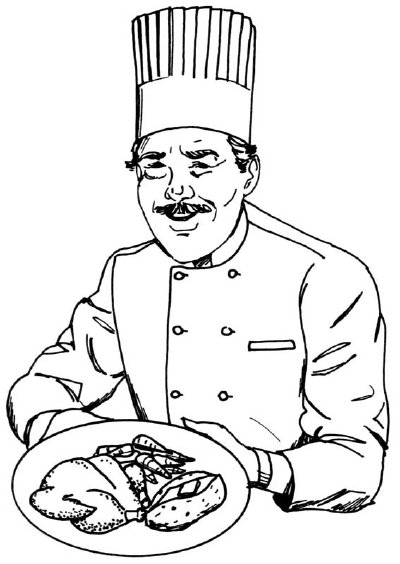 This chef rules the kitchen. Learn to draw this chef -- from his tall chefs hat to his crisp coat -- in just five simple steps.
Publications International, Ltd.

This chef has finished his latest dish, and it looks delicious. You don't need culinary skills to learn how to draw this chef -- just a little bit of imagination and the helpful steps below.

In this section, we'll show you how to draw the above chef. Either draw the picture freehand while looking at your computer monitor or print out this page to get a closer look at each step. 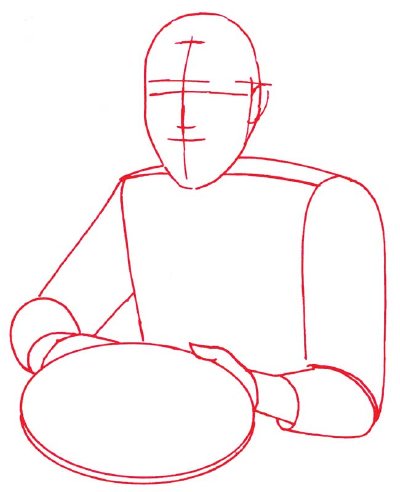 Draw an oval head. Divide it into uneven left and right halves. Section the head into uneven upper and lower halves for the positions of the eyes. Place lines for the hairline, eyebrows, nose, and mouth as shown here. Sketch lines for the top and bottom of the ear that are even with the nose and eyebrows.

Next, we'll draw the food and clothes.­ 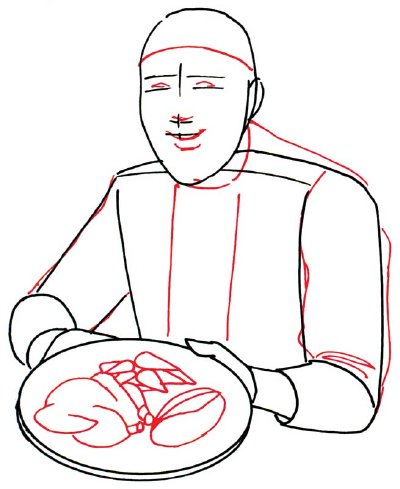 Use a curved line for the base of the chef's hat. Sketch unfinished ovals with pointed ends for the eyes. Form the bottom of the nose and lower lip with a few curved lines. Show the general shape of the jacket using straight and curved lines. Wrinkle the elbow area on your right with a very jagged line.

Draw the chicken using curved lines, two small ovals, an unfinished oval for the wing, and a U-shaped figure for the drumstick near the wing. Form overlapping cone-shaped figures for the baby carrots and an oval with two curved lines inside of it for the baked potato.

Next, we'll draw the hat and jacket.

3. Draw the Hat and Jacket 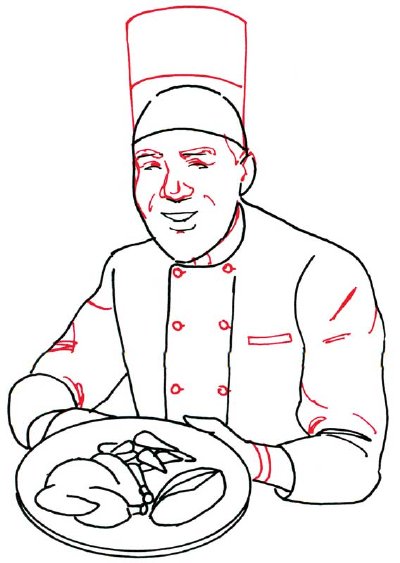 Attach a curved rectangle to the head with two straight lines to form the chef's hat. Add curved lines for the ears, cheek on your left, and part of the hairline near the ear on your right. Use curved tubes with pointed ends for the eyebrows. Form the eyes and upper eyelids with small darkened figures and short curved lines.

We'll work on adding more detail on the next page. 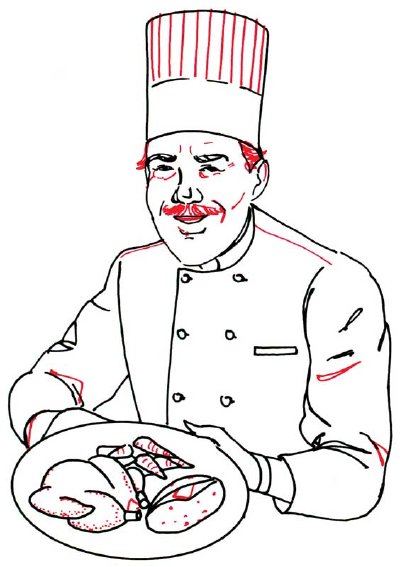 We'll add the final touches on the next page.

­Use many straight and slightly curved lines to add wrinkles and shading to the hat, forehead, neck, jacket, shirt sleeve, and hand.