How to Draw Backhoes in 11 Steps

Browse the article How to Draw Backhoes in 11 Steps 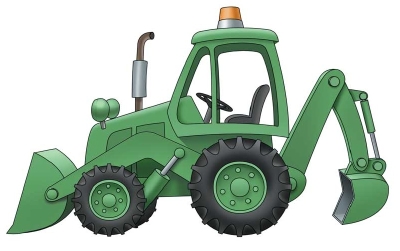 Learn to draw backhoes and other construction vehicles with our step-by-step instructions.
Publications International, Ltd.

­The backhoe is a versatile machine -- it can dig and scoop with its buckets on the front and back. The large bucket on this construction vehicle is attached to the end of an arm. Some say the arm looks like a giant human arm.

In this section, we'll show you how to draw the above backhoe. You can draw this construction vehicle freehand while looking at your computer monitor or print out this page to get a closer look at each step.

Begin by drawing the wheels, which are made up of many circles.

On the next page we'll draw the treads.

Add the Treads to the Tires

To add tread to the tires, draw a starburst shape around each of the outside circles. This is fun to do!

On the next step we'll draw the body. 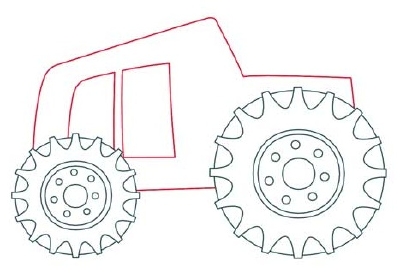 Draw the shape that makes up the body of the backhoe. Draw two rectangles inside the front of this shape. Be sure to round the one corner as shown.

Up next, we'll draw the cab. 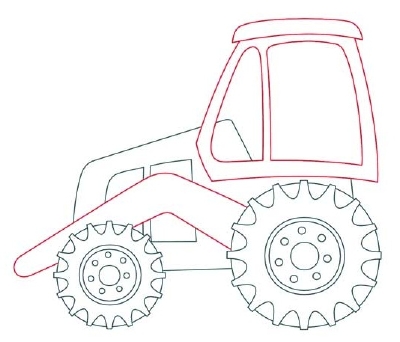 Draw the cab; notice how the top is narrower than the bottom. Draw the windows in the cab. Draw the roof. On the side, draw a boomerang shape from the back wheel to past the front wheel.

Next, we'll draw the safety light and exhaust pipe.

Draw the Light and Exhaust Pipe 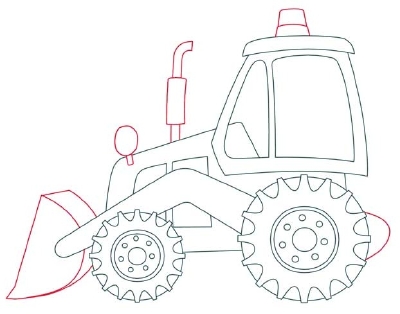 ­Draw the safety light on the cab roof, and draw the back of the headlight at the front of the hood. On the hood, draw the muffler, which is a rectangle with a pipe running through it.

For the front bucket, draw a half-circle, adding a point that juts out at the bottom. Outline the bucket to add depth. At the rear, draw a small bump behind the tire.

We'll add some detail to our backhoe on the next page.

Add Detail to the Cab 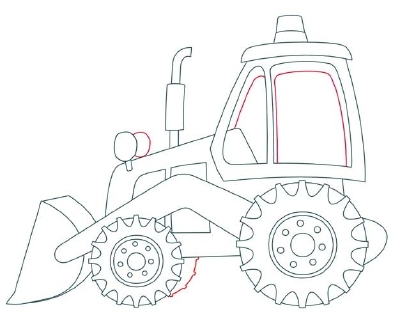 Up next, we'll draw the boom. 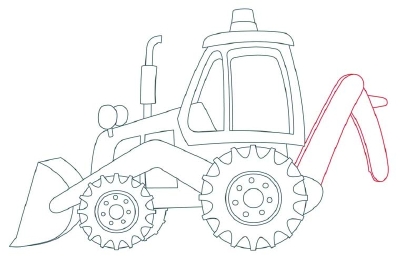 ­Draw the arm for the backhoe scoop. It is made up of two curved rectangular shapes with rounded ends. Outline each rectangle for depth.

Draw the rounded triangular shape near the top of the lower arm.

Next, we'll draw the seat and steering wheel.­

Draw the Seat and Steering Wheel 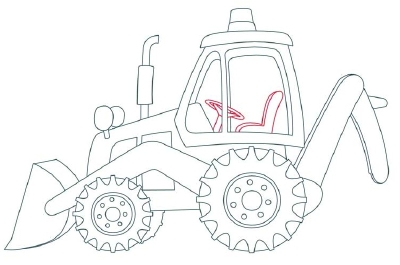 Draw the steering wheel and driver's seat inside the cab. Add detail lines for depth.

We'll add the scoop on the next page. 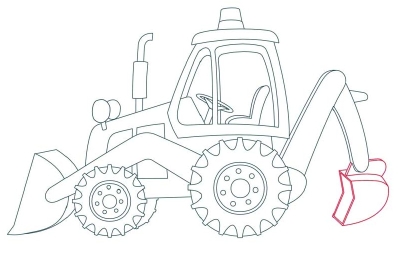 Draw the backhoe scoop. Look at the example to see how it attaches to the boom.

We'll draw the hydraulics on the next page. 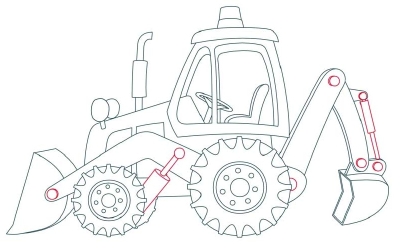 Add circles for the pivot points that move the arms up and down. Outline the circles where indicated to add depth. To finish your backhoe, draw two hydraulic cylinders.

On the next page, we'll finish our drawing. 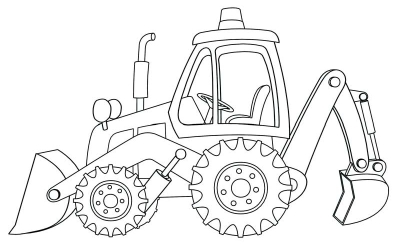 Drawing the backhoe was great fun, huh? Even more fun is drawing every kid's favorite construction vehicle -- the popular dump truck. Continue to the next page to learn how to draw dump trucks.