How to Draw a Woman in a Sundress 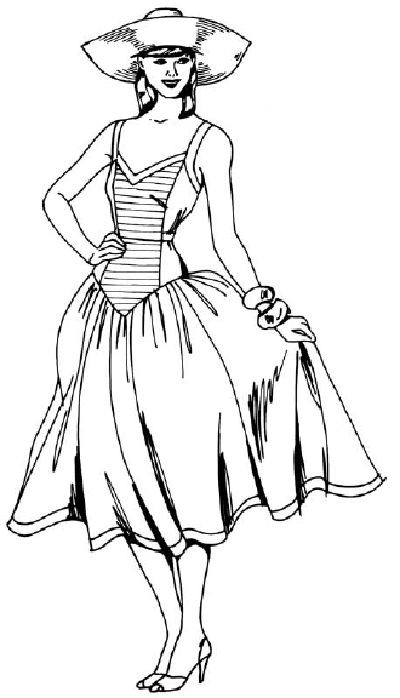 Learn how to draw a woman in a sundress with step-by-step instructions and illustrations.
Publications International, Ltd.

This woman in a sundress looks fresh and cool on a hot summer's day. Whether she's headed for a sophisticated p­arty or a casual cruise, you can almost feel the fresh cool breeze.In this section, we'll show you how to draw the woman in a sundress above. Either draw the picture freehand while looking at your computer monitor or print out this page to get a closer look at each step.

Sketch a horizontal line for the hairline one-sixth of the way down from the top of the oval. Divide the area below that into three equal parts. The first line below the hairline is for the eyebrows, and the next line shows the location of the tip of the nose. The ears lie between the eyebrows and the nose.

Draw a curved line under the head to show the shape of the neck and backbone. Use rectangles for the chest and hip areas. Form the arms and legs with curved tube shapes. Sketch oval shapes for the shoulders and kneecaps. Draw two odd-shaped diamonds for the hands. Use wedge shapes for the feet.

2: Draw the Hat and Shape the Body 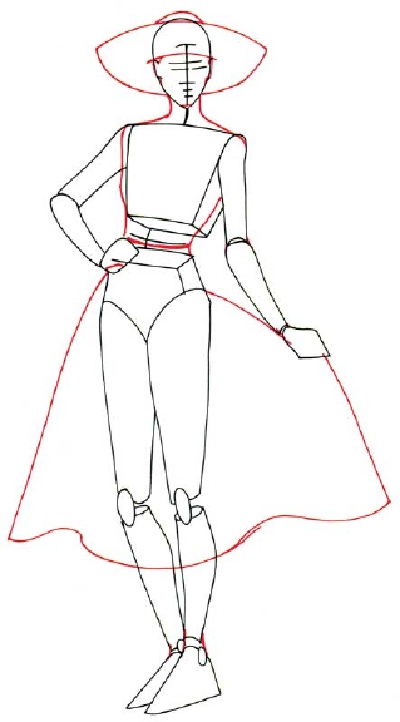 ­Draw two small ovals to form the ears. Use curved lines above and below the ears for the hairline. Add ovals to block the hat. Extend curved lines below the hat for the neck and shoulders. Draw in straight lines for the bodice.

Use small curved lines to shape the chin, right elbow and wrist and ankles. Sketch curved and wavy lines to define the skirt. 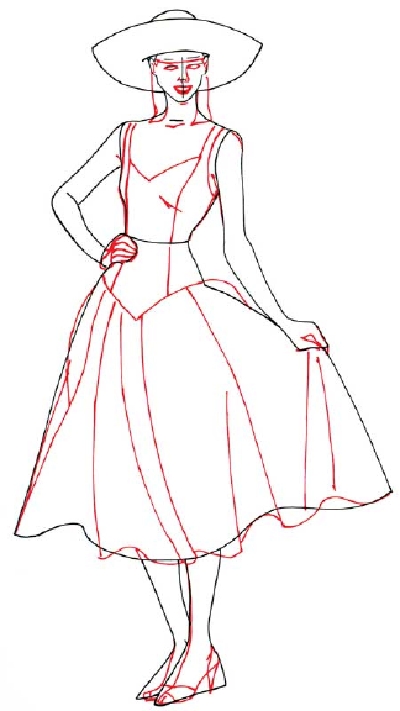 ­ Use squiggles at the temples for the hair. Add a slightly curved line below the brim of the hat for the bangs. Draw in the ears, eyes, mouth, and hair with curves and ovals as shown.

Sketch a V-shaped figure for the neckline and a set of straight lines for each shoulder strap. Extend two lines from the shoulder straps below the waist. Draw an odd-shaped V at the end of these lines.

Sketch several long straight lines from the V-shape to the hem. Make sure the hem of the skirt flows with the folds. Use odd-shaped rectangles and triangles to form the shoes. Shape the hands with curved lines. 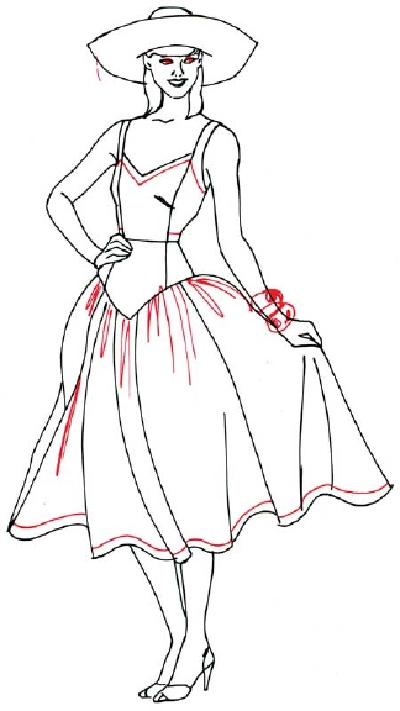 Darken in the eyes and use dark curves for the eyebrows.

Add zigzag lines at the top of the bodice and curved lines at the hemline. Show the waistline with two small horizontal lines. Add many squiggles to the skirt to show wrinkles.

Use odd-shaped ovals for the bracelets.

Finish the hair with squiggles. Add texture to the hat with short straight lines. Draw horizontal lines on the bodice of the dress. Add shading to the side, bracelets, and skirt.

You've got it! The woman in the sundress definitely looks like she's relaxing over a long weekend. But what about the workaday woman? See the next section to learn how to draw a walking woman in a pantsuit.