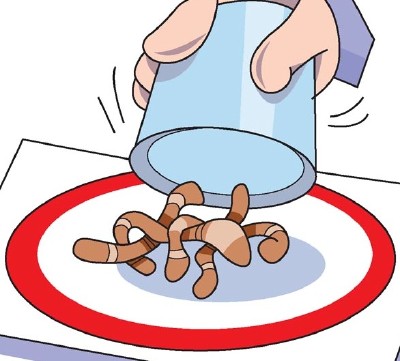 At first glance, worms seem like simple creatures, but these burrowing bugs with interesting anatomical structures are an important part of our ecosystem.

When you participate in the following worm activities, you will learn not only how worms live and work, but also the intricate details of a worm's anatomy.

Read about great worm activities on the following pages.

Find out how to watch worms in their natural environment in this fun worm activity. Learn what worms do in the earth.

Create a happy home for worms and observe their behavior in the comfort of your own home.

Watch worms compete and guess which worm will be the winner of the worm bowl. Find out how to create this great game.

Watch worms living together and find out how they interact when you build a worm condo. Learn how to create a happy home for worms.

How much does a worm eat? Find out when you participate in this fascinating worm activity. Leave food out for worms and watch what happens.

Get up close and personal with earthworms. Observe the intricacies of their anatomy, and discover the complexity of a worm's body.

Ready to get started? Find out how to start observing worms on the next page.

In our Observing Worms activity, you will see how worms are a necessary part of nature's delicate balance.

For this activity, you'll need to find some good-sized worms to observe. You can dig in soft, moist garden soil to find lots of small ones.

To find big nightcrawlers, go out onto a healthy lawn at night with a flashlight. You might try lifting a large stone or flowerpot, or digging under the ground's surface.

Once you've got your worm, wet your fingers and run them down both sides of the worm at once. You may be surprised to feel short, stiff bristles (called "setae") that help the worm move through the soil.

Put the worm on a dry piece of paper and let it crawl. You will hear a faint scratching noise as the setae rub on the paper.

Notice how the worm moves. Strong muscles running up and down the body shorten it, while ring-shaped muscles squeeze it to make it longer.

Write down your findings and make drawings of your worm. Always put the worms back where you found them when you are done. After observing individual worms, watch worms making tracks in our next activity, wiggly workers, on the following page. 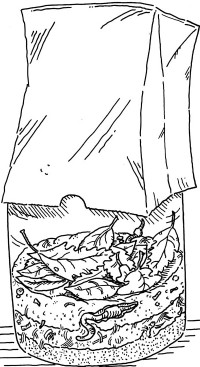 In this "Wiggly Workers" activity, you'll discover why earthworms have been called "a gardener's best friend."

To make a wormery, first get a large jar that has a wide opening. Put in a layer of soil, a layer of peat, and a layer of sand. Water the soil well. Now dig some worms from a garden and put them in your wormery. Don't bury the worms!

They'll take care of that themselves. But do cover the worms with some dead leaves. Set a paper bag over the top of the jar. This will keep out light, but let in the oxygen that worms need. Now put the jar in a cool place out of direct sunlight.

Keep your wormery damp and keep an eye on the earthworms. Can you guess why gardeners like earthworms? It's because they digest and pass soil through their bodies, loosening the soil and mixing nutrients. Plants grow better in looser soil with plenty of oxygen. Once you've seen the worms work, put them back where you got them.

In our next worm activity, you'll learn how to create a friendly competition for your worm friends.

If you were searching for a big nightcrawler to use as bait for fishing, you might have a hard time pulling it out of the ground. This creature's body has 150 rings or segments, with eight little bristles on each segment. So, it has 1,200 little feet to grab onto the dirt, and to hold on tightly!

Put the worms in the center of a circle to start the race.

In the last worm activity, you watched these creepy crawlers work. Now it's time to let the worms have fun in the worm bowl!

Stopwatch or watch with second hand

1. Do you think a bowl full of wriggling worms turned upside down is gross? In this activity, you will turn the bowl over to see which worm crawls the fastest. Welcome to the Worm Bowl! Get ready to rumble!

2. This activity works best with 3 or more people. Give 5 mealworms on a paper plate to each person playing.

3. Ask everyone to observe their mealworms and choose the worm they'd like to enter the race. Using markers, each person gently places a distinctive mark on the abdomen of his or her mealworm.

4. On a large sheet of poster paper, draw a circle 12 inches in diameter.

Watch to see which worm wins the race!

7. See which mealworm takes the shortest time to get out of the circle.The speediest worm wins the Worm Bowl!

The Worm Bowl requires observation and prediction. The contestants observe their mealworms and try to choose some characteristics that they believe will make them leave the circle the fastest. When they select a mealworm, they are predicting which will go the fastest to the outer part of the circle.

Of course, mealworms are living things. They can be very active one moment and calm the next. It can be very hard to predict the winner, which is what makes the Worm Bowl so exciting!

Although mealworms are long, all 3 pairs of legs are located on the thorax, very close to the head.

After a long day of competition, your worms might want to relax in a worm condo. Find out how to build one on the next page. 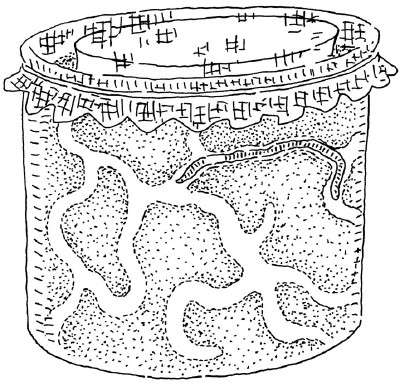 If you've participated in the previous activities, you already know that worms are fascinating creatures -- now you can build them a home! In this next activity, watch them tunnel through the dirt, then return them to their natural environment after a few days!

2 clear plastic containers (one slightly smaller than the other)

Screen or piece of stocking

First, you'll need a clear plastic container. Place another container, an inch or so smaller in diameter, inside the larger container. You are creating a narrow enough space between the containers so you'll be able to see the worms tunnel.

Fill the space between the 2 containers with a good supply of fresh soil (not potting soil), and keep it moist (but not soaked). Put in some worms, then cover the container with a piece of screen or stocking for good air flow. Secure this cover with a rubber band.

Now watch the worms as they tunnel through the soil! (Be sure to keep this out of the hot sun, and free the worms after a few days of observation.)

Now that you've built a home for your worm friends, what on earth are you going to feed them? Find out how to make worm food on the next page. 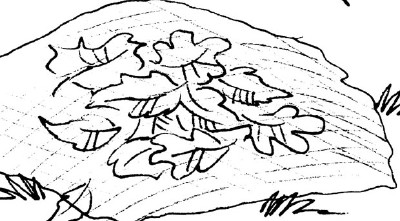 Place the worm food on top of the netting.

In this next worm activity, you will learn how to make worm food.

Coarse netting (such as an old onion or orange sack)

Pick a spot on the lawn with thick, green grass and soft soil. Worms will be active in this area. When the lawn has been mowed and watered and the grass is short, lay out some fallen leaves.

Cover the leaves with netting and use tent stakes to hold the netting in place. (This will keep the leaves from blowing away.) In your notebook, sketch the pattern of leaves exactly as you see them. Label this picture "Start."

Worms like to grab leaves and pull them down in their burrows to munch on later. You probably won't see all the leaves disappear, but worms active in the spot you choose will probably take away some of them.

In our last worm activity, you will get new ideas about how to make worm observations. Read about it on the next page. 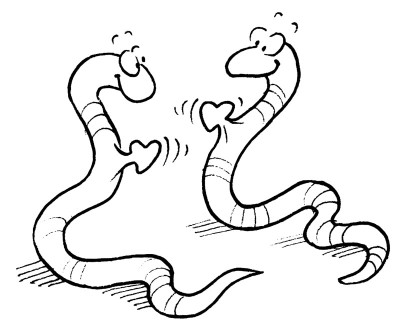 Observe the five beating hearts in a worm.

In our last activity, you'll learn more about worms through worm experiments.

Carefully dig up some worms in a garden and put them in a container. Prepare a worm-friendly surface for your observations. Lay three thicknesses of paper towel on a waterproof surface and moisten the paper until very wet. Set the worm on the wet paper towel.

On the outside: Look for a wide, thick band around the worm's middle. This is called a clitellum. It is closest to the head end. Look at the head with your magnifying glass. See if you can find the mouth, with its overhanging lip.

Notice that the worm's body is made up of segments. Each segment has two pairs of special bristles (called setae). Wet your fingers and run them down the worm's body to feel the rough setae.

Getting around: Let the worm crawl on the paper towel. When it wants to move, it becomes long and thin. If you touch it, the worm contracts and becomes thicker.

The worm has two layers of muscles; those running around the body squeeze the worm and make it thinner and longer. Those running end to end make the worm shorter and thicker.

Heartbeats: Find a light-colored worm. Wet its upper surface and use your magnifying glass to observe the upper surface near the head. Look for the worm's five beating hearts.

Strong reactions: Dip a cotton swab in alcohol or nail polish remover. Hold the swab close to the worm's head, but DON'T touch the worm with the strong chemical.

What happens when the swab is near the head? Does the worm move? Hold the swab near the tail, then near the middle. Can the worm detect where the fumes are? How does it react?