Moose for a Moment 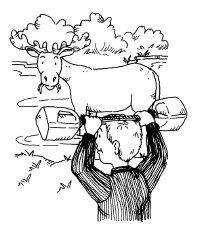 Would you want to be a moose?

You can take on the title of "Moose for a Moment" when you try this fun activity. Imagine walking around all day with antlers on your head that are six feet wide and that weigh 85 pounds -- that's about the size and weight of antlers for an average moose.

Don't worry -- the antlers you're going to make don't weight that much and they aren't that wide, but you'll still get the idea: It's not easy being a moose.

How to Make the "Moose for a Moment" Craft:

Get the stick, string, and milk jugs. The stick will become the "rack" part of your antlers, and the milk jugs are your antlers' "points." With the string, tie a jug on each side of the stick. Tie a couple knots in the string so the jugs don't fall off. (If you don't have two milk jugs, you can make points out of construction paper.)

When you've made your antlers, hold them on top of your head. Then, be careful where you turn around. Can you walk through your bedroom door? Remember, if you were really a moose, those antlers would weigh 85 pounds (and you would weigh about a half of a ton). Do you think it would be easy to run at top speed through thick forest? Try running with your antlers on your head -- but be careful!